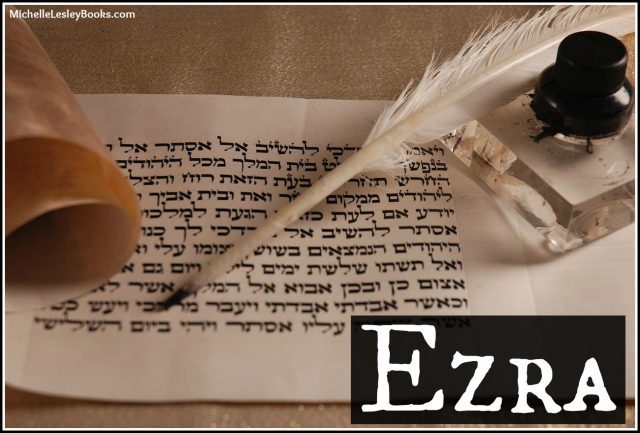 Now these were the people of the province who came up out of the captivity of those exiles whom Nebuchadnezzar the king of Babylon had carried captive to Babylonia. They returned to Jerusalem and Judah, each to his own town. 2 They came with Zerubbabel, Jeshua, Nehemiah, Seraiah, Reelaiah, Mordecai, Bilshan, Mispar, Bigvai, Rehum, and Baanah.

58 All the temple servants and the sons of Solomon’s servants were 392.

59 The following were those who came up from Tel-melah, Tel-harsha, Cherub, Addan, and Immer,though they could not prove their fathers’ houses or their descent, whether they belonged to Israel:60 the sons of Delaiah, the sons of Tobiah, and the sons of Nekoda, 652. 61 Also, of the sons of the priests: the sons of Habaiah, the sons of Hakkoz, and the sons of Barzillai (who had taken a wife from the daughters of Barzillai the Gileadite, and was called by their name). 62 These sought their registration among those enrolled in the genealogies, but they were not found there, and so they were excluded from the priesthood as unclean. 63 The governor told them that they were not to partake of the most holy food, until there should be a priest to consult Urim and Thummim.

68 Some of the heads of families, when they came to the house of the Lord that is in Jerusalem, made freewill offerings for the house of God, to erect it on its site. 69 According to their ability they gave tothe treasury of the work 61,000 darics of gold, 5,000 minas of silver, and 100 priests’ garments.

70 Now the priests, the Levites, some of the people, the singers, the gatekeepers, and the temple servants lived in their towns, and all the rest of Israel in their towns.

1. Review again the historical background for the book of Ezra from lesson 1 (link above). How many stages of exile had there been from Judah to Babylon? How many stages of return of the exiles from Babylonia? Was this (v.1-2) the first, second, or third of the return trips? Who led this return trip? Where did the exiles settle upon their return? (1)

All Scripture is breathed out by God and profitable for teaching, for reproof, for correction, and for training in righteousness, that the man of God may be complete, equipped for every good work.

Does “all Scripture” include Ezra 2:2-67? How is the census information given in verses 2-67 “profitable” to Christians? Do you think the information in these verses is for teaching, reproof, correction, or training in righteousness? How do these verses “complete” and “equip” Christians for good works?

3. Notice that the group of exiles precisely numbered in verses 2-67 is organized and subdivided into several categories. What are those categories? (2b, 36a, 40a, 43a, 55a, 59). Read verses 68-69, and glance ahead at Ezra 3. What is the main event of those passages? Does this shed some light on why the categories in verses 2-67 focus largely on temple officials and leadership?

4. What was the special situation of the people mentioned in verses 59-63? (53) What two actions were taken regarding this situation in verses 62 and 63? Why would they have been excluded from the priesthood or partaking of the most holy food? What were the Urim and Thummim, and why would the priest have needed to consult them? What does this passage demonstrate about the separation between God’s people and the world? How does the New Testament reinforce this idea for Christians? Why did/does God not want His people to yoke themselves to unbelievers?

5. What does the precision and organization of the census information in verses 2-67 tell you about Ezra’s administrative skills? How can people with administrative gifts use those gifts to serve the body of Christ today? How does the information in these verses reflect on the nature and character of God? His omniscience? His love and care for His people? His attention to detail? The accuracy of His word?

It's time for another episode of The Pew on @awordfitlyspoken - the latest scoops in evangelicalism and how to think biblically about them:
IF:Gathering is coming up March 3-4. It's dangerous and deceptive and nothing any doctrinally sound church should be promoting.
In today's edition of The Mailbag: "Christians, the Bible, and Tattoos"