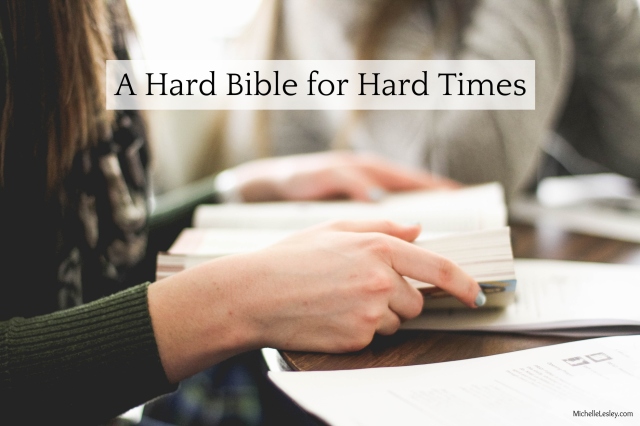 Roughly 20 lessons of digging into the text of what can be a challenging passage of Scripture.

I believe you’re up for the challenge, ladies. Let’s study.

A couple of days ago, I launched Ezekiel – our new Bible study here on the blog – with these introductory remarks on social media. I made it pretty clear, both in my social media remarks and the introduction to the study itself that this wasn’t going to be your typical walk-in-the-park women’s “Bible” study designed to make you feel better about yourself.

And yet, I was overwhelmed by the response from so many readers: “I’m in!” “Sign me up!” “Looks like a good time!” “Excited is an understatement!”

All this about….a hard text? More work? Even as we endure Corona and quarantine, separation from loved ones, the shuttering of our churches, economic hardship, increasing persecution, racial strife, rampant crime, rioting, anarchy, and God only knows what’s next?

Yeah. Want to know why?

It’s the same reason that being bone-weary after a long day of hot, sweaty yard work feels better than the mind-numbed sleepiness you feel when you’ve been binge-watching Netflix in your pajamas all day. The same reason you feel better after a satisfying, well-balanced meal than after snarfing a dozen Oreos.

It’s what we need.

It’s what’s good for us.

We need a hard Bible in these hard times.

Think about the hard times the first century Christians of the New Testament went through. For refusing to offer a pinch of incense in worship to Caesar, for declaring that Jesus alone – not Jesus plus the pantheon – is Lord, they were fed to the lions for sport, burned and boiled alive, crucified, beheaded, speared, beaten, stoned, whipped, exiled, and considered “the scum of the world, the refuse of all things.”

And for most of that first century, the bulk of the Scriptures Believers had access to was the Old Testament. The part that soft, milquetoasty, “I want a God made in my own image” evangelicals today want to “unhitch” from precisely because it’s hard.

While fearing for their very lives for following Christ, our forefathers in the faith studied the God who flooded the earth for its rebellion against Him, who wiped out pagan nations for their idolatry, who sent horrific plagues upon those who defied Him, and who poured out His wrath on His own people for their sin and spiritual whoredom.

They had a hard Bible during their hard times.

To be sure, they saw, and we also see, the God of mercy, love, and grace who spared Noah, who provided His children with a land flowing with milk and honey, who rescued the Hebrews out of slavery, and who blessed all who were faithful to Him. And we know that all of Scripture – the hard to swallow parts and the easy to embrace parts, the “dig in and study hard” parts and the simple and sweet to the soul parts – all of Scripture is profitable.

But we need a hard Bible for hard times.

Because hard passages that make us stop and spend extra time and effort build discipline, endurance, and patience into our spirits. They make us do the hard work of digging for the nature and character of God and reward us with the treasure of knowing Him more intimately. They show us who God is in a unique way that the easy passages do not.

Feelings, fluff, and false doctrine can never accomplish those ends. They do not prepare us to endure suffering and persecution with strength and dignity, but to whine and complain and focus on the hurt. They do not teach us who God truly is in our trials and temptations, but that we can create a custom-made idol we’re comfortable with and call it “God”. They do not lead us to trust and obey God when the going gets tough, but to abandon His Word and His statutes in favor of worldly means and methods of dealing with difficulties.

Most evangelical women today are spiritually flaccid because no one – not their denomination, nor their church, nor their pastor, nor their Sunday School teachers, nor their women’s ministry leaders, nor their favorite “Bible” study authors – has ever made them do the hard work of wrestling with challenging Scriptures, overcoming them, and adding that victory to their inventory of joy in Christ.

We need to raise the bar.

We need to expect more, not less.

We need to encourage the pink side of the pew to do hard spiritual things, and cheer them on and help them as they try.

The Kingdom needs strong, godly women who apply their hearts and minds to knowing and understanding God’s Word and reach down to help their weaker sisters do the same.

Hiding God’s Word in our hearts doesn’t just mean we learn the surface-level do’s and don’t’s, giving us a spiritual Post-It note reminder not to lie and steal. In order to hide something, we first have to possess it. Own it. And to own God’s Word we have to plunge in and swim in it. Breathe it in and out. Drink deeply of it. Eat the honey-sweet scroll. Let it so penetrate our souls’ DNA that when the rooster begins to crow, and the accusers point and say, “I know you. You were with Jesus,” we can plant our feet firmly and mean it when we boldly declare, “Yes. And though others may fall away because of Him, I will never fall away. Even if I must die for Jesus, I will not sin by denying Him.”

Because those hard times are coming.

Indeed, they are already here.

And we need a hard Bible for hard times.

6 thoughts on “A Hard Bible for Hard Times”