Whatever I command you, you shall be careful to do; you shall not add to nor take away from it. Deuteronomy 12:32

Remember long division? Some of us probably remember it fondly. For others, it was a nightmare of ghoulish proportions. Likely, most of us can still remember how to do it.

Ever tried to teach it to an eight year old?

That was my life last week.

If you think about it, it’s really not that any of the steps in long division are that hard. You have to know your times tables and you have to know how to subtract. That’s pretty much it as far as mathematical operations go. The tough part is working step by step and getting all the steps in the right order. One number out of place, one step out of order, and the whole thing falls apart.

And then, so does your eight year old.

The Old Testament is the story of long division. God told His people what to do, how to do it, and in what order to do it…

Bring Me the firstfruits, then you can use what is left.

Put Me first in everything.

He spelled it all out for them, even carved it in stone, and still, they couldn’t get it. Many times, the majority of them gave up even trying and openly rebelled. For others, initially desiring to be obedient, striving became the order of the day. They added layers and layers of rules on top of the ones God had given to protect themselves from even coming close to breaking God’s original commands. And somewhere along the way, they lost the heart of God, and began to worship rule-keeping. Their steps were out of order at the deepest and most basic level, and things fell apart for them. Often. And badly.

But don’t judge the Israelites harshly. We do exactly the same thing. Some of us rebel. Some of us strive. And both ways are equally displeasing to God.

Because the first step in coming to God is to realize and admit that we can’t get it right. God never intended that we should be saved and in right standing with Him by keeping His Law and doing good deeds. Galatians 3:24 tells us that the whole purpose of the Law was to show us that we can’t keep it, and to lead us to throw ourselves upon the mercy of God for forgiveness and salvation.

Does God desire our obedience? Of course. But not as a way to garner His favor or to outweigh the bad things we’ve done. Because it’s not our outward behavior itself that pleases Him, it’s a heart that’s wholly His. He desires that we obey out of a heart of love and gratitude to Him for saving us. 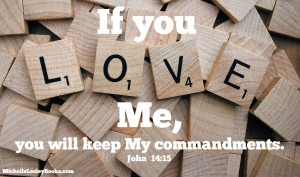 Love Him first, then obedience will be a natural outflow.

Just take it one step at a time.