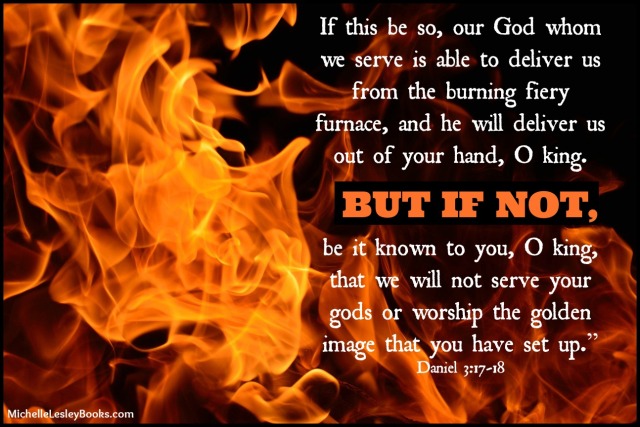 8 Therefore at that time certain Chaldeans came forward and maliciously accused the Jews. 9 They declared to King Nebuchadnezzar, “O king, live forever! 10 You, O king, have made a decree, that every man who hears the sound of the horn, pipe, lyre, trigon, harp, bagpipe, and every kind of music, shall fall down and worship the golden image. 11 And whoever does not fall down and worship shall be cast into a burning fiery furnace.12 There are certain Jews whom you have appointed over the affairs of the province of Babylon: Shadrach, Meshach, and Abednego. These men, O king, pay no attention to you; they do not serve your gods or worship the golden image that you have set up.”

13 Then Nebuchadnezzar in furious rage commanded that Shadrach, Meshach, and Abednego be brought. So they brought these men before the king. 14 Nebuchadnezzar answered and said to them, “Is it true, O Shadrach, Meshach, and Abednego, that you do not serve my gods or worship the golden image that I have set up? 15 Now if you are ready when you hear the sound of the horn, pipe, lyre, trigon, harp, bagpipe, and every kind of music, to fall down and worship the image that I have made, well and good. But if you do not worship, you shall immediately be cast into a burning fiery furnace. And who is the god who will deliver you out of my hands?”

16 Shadrach, Meshach, and Abednego answered and said to the king, “O Nebuchadnezzar, we have no need to answer you in this matter. 17 If this be so, our God whom we serve is able to deliver us from the burning fiery furnace, and he will deliver us out of your hand, O king. 18 But if not, be it known to you, O king, that we will not serve your gods or worship the golden image that you have set up.”

24 Then King Nebuchadnezzar was astonished and rose up in haste. He declared to his counselors, “Did we not cast three men bound into the fire?” They answered and said to the king, “True, O king.” 25 He answered and said, “But I see four men unbound, walking in the midst of the fire, and they are not hurt; and the appearance of the fourth is like a son of the gods.”

1. What is the historical setting of the book of Daniel? Which nationality and religion were the Shadrach, Meshach, and Abednego? Nebuchadnezzar? Why do verses 2-3 list out all the specific government officials? What does this tell us about Nebuchadnezzar’s power, influence, and the reach of his edicts? Why might he have built the image and commanded everyone to worship it? (5-7, 12-15)

2. Read Romans 13:1-3. How does Shadrach, Meshach, and Abednego’s defiance of the king compare to God’s command to obey governmental authority? Were they obeying God by refusing to worship the image or disobeying Him by refusing to submit to the king? (Hint) Can you think of any situations in the world today that might force us to disobey the government in order to obey God?

4. How did Shadrach, Meshach, and Abednego’s unconditional obedience to God and willingness to die for their faith impact Nebuchadnezzar? (26, 28) The officials? (27) What actions did Nebuchadnezzar take as a result? (29-30) How did these actions affect Shadrach, Meshach, and Abednego? The exiled Jews? The people of Babylon? How might your faithfulness to Christ impact those around you?

5. What do we learn about the nature and character of God from this story? Would it call God’s character into question if He hadn’t rescued Shadrach, Meshach, and Abednego?

Here’s a more detailed study I wrote on Daniel 3.

So, pastors and women’s ministry leaders, how can the church best honor moms during the Mother’s Day worship service? Here are seven ways…
Today on the blog: