I have heard pastors say that believers can sin for a ‘season’ without repentance. In regards to professing believers who follow false teachers, what is a ‘season’? Can they continue following them for months? Years?

Is it possible that someone who is a false teacher is actually saved? Could she truly believe the biblical gospel even though, for decades, she has been terribly mishandling God’s Word, and has been on an increasing trajectory of sin and false doctrine?

I’ve combined two questions for this edition of The Mailbag because they are very closely related, if not, in fact, the same basic question.

I’m glad you asked. This is such an important issue to think through because, unfortunately, we are surrounded by professing Christians walking down these paths.

When I hear people use the the term “season” when referring to the Christian life, it’s been my experience that they usually mean “an indeterminate period of time”. In my mind, a “season” is longer than a couple of weeks, but shorter than several decades. That really narrows it down, doesn’t it? :0) But if you asked a hundred Christians what a season is, you’d probably get a hundred different answers.

When Christians say that someone can sin “for a season” they are likely alluding to the King James translation of Hebrews 11:25:

By faith Moses, when he was come to years, refused to be called the son of Pharaoh’s daughter; Choosing rather to suffer affliction with the people of God, than to enjoy the pleasures of sin for a season;
Hebrews 11:24-25

You might want to take a look at some other reliable translations alongside the King James. The primary emphasis of the end of verse 25 is that the pleasure our flesh gets from sinning is fleeting, transitory, temporary. But the KJV looks at another petal on the same rosebud and helpfully explains that because that pleasure is temporary, the time spent happily wallowing in that sin should, consequently, also be temporary. The prodigal son is a good example of this. Once he found himself in the pigpen, sin wasn’t much fun any more, and that’s when his thoughts turned to repentance.¹

The next issues we need to tackle are sin and salvation. Here’s what we know:

🕇 Anybody who has a basic grasp of the biblical definition of sin knows that even the most Christlike Christians still sin and that sinless perfectionism is a bunch of hooey and hubris.

🕇 Finally, we know that there are false converts among us, who appear to be Christians for a “season,” and then walk away from the faith never to return, proving that they were never truly saved in the first place.

So how can we tell the difference between a genuine Christian who is temporarily walking in sin and a false convert who’s on her way out the door?

Most of the time, if she’s still claiming to be a Christian, we can’t know with certainty.

Often, the only way to know for sure that a person who seemed to be a Christian isn’t saved is if she either a) unequivocally renounces Christianity (i.e. “I no longer believe in God,” “I used to be a Christian,” etc.) or b) picks up a new belief system that clearly puts her outside the camp of Christianity, (i.e. “I don’t believe in the Trinity,” “I don’t believe Jesus was God,” “I’m now a Mormon,” etc.). In other words, if a person tells you she’s not a Christian, you can believe her.

But for the person who is sinning, following false teachers, or teaching false doctrine (that doesn’t conflict with biblical soteriology), and claims to be a Christian, it can be harder to tell. Why? Because we aren’t God.

When Samuel was trying to figure out which one of Jesse’s sons to anoint as the next king of Israel, God told him something that’s very instructive to this issue:

When they came, [Samuel] looked on Eliab and thought, “Surely the Lord’s anointed is before him.” But the Lord said to Samuel, “Do not look on his appearance or on the height of his stature, because I have rejected him. For the Lord sees not as man sees: man looks on the outward appearance, but the Lord looks on the heart.”
1 Samuel 16:6-7

Regardless of what someone appears or claims to be on the outside, only God knows the heart of each person. And that’s really good news for us, because it relieves us of the burden of having to read another person’s heart. That’s God’s job, not ours. 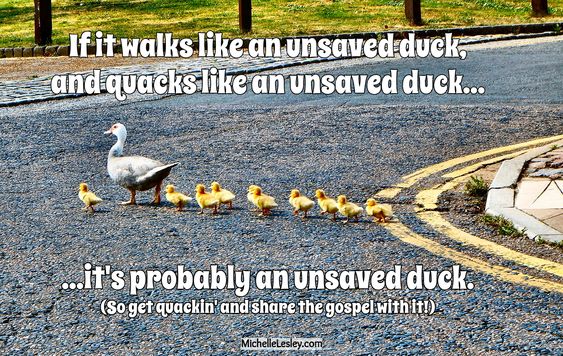 God has given the church – Believers – the responsibility of seeing to the spiritual welfare of our fellow church members who are sinning. We handle the tangible, visible “action” part of the situation, and God works through our words and actions to handle the invisible, spiritual part of the situation in whatever way He may choose to handle it. And God has given us very clear instructions in Scripture about how to regard, evaluate, and handle these kinds of situations.

🕇 God clearly explains to us throughout Scripture exactly what constitutes sin and false doctrine. We compare what someone is teaching, believing, or doing with the applicable, rightly handled, in context Scriptures. If the person’s teaching, beliefs, or behavior isn’t in compliance with those Scriptures, the person is sinning.

🕇 God vests Christians with the responsibility of lovingly confronting sin in our brothers and sisters and urging them to repent and be reconciled to God, and He explains to us, in Scripture, how to do this.

🕇 God makes clear in John 10 that people He has genuinely saved – His sheep – will not listen to the voice of a stranger (false teacher). I have experienced the truth of this statement myself and seen it play out in the lives of dozens of women over the years: “I went to a women’s Bible study when I was a young Christian where they were using materials by [a false teacher]. I was really uncomfortable because I knew something was wrong, even though I wasn’t sure what it was. Years later, looking back and having learned my Bible, I now see I felt that way because I was being taught false doctrine.”

🕇 The overwhelming majority of the Scriptures dealing with false teachers seem to indicate that unrepentant false teachers are not saved. (I discussed these Scriptures in my article Can a False Teacher Be a Christian?.) But, again, with those who profess to believe the biblical gospel, we cannot know their hearts with certainty, and we do not have to. We evaluate their visible teaching and behavior according to Scripture and carry out the procedures for dealing with sin in the Body that God has prescribed in His Word.

How long of a “season” can someone walk in sin, follow a false teacher, or teach (non-soteriological) false doctrine before we know for certain she’s not saved? The farthest I will go is to say that the longer a person walks in increasing rebellion against God and His Word, the less likely it is that that person is genuinely saved. Saved people hate their sin. Saved people respond humbly and obediently to biblical correction. Saved people repent. But how long that takes varies from individual to individual. It’s impossible to put a number of days, weeks, months or years on it, and with many people who profess to be Christians while doing these things, we may never know this side of Glory.

¹THERE IS DISAGREEMENT AMONG SOME CHRISTIANS AS TO WHETHER THE PRODIGAL SON REPRESENTS A LOST PERSON WHO SUBSEQUENTLY GOT SAVED, OR WHETHER HE REPRESENTS SOMEONE WHO WAS SAVED, FELL INTO SIN FOR A SEASON, THEN CAME TO HIS SENSES AND REPENTED. I TEND TO BELIEVE THE FORMER DUE TO CONTEXT (SEE LUKE 15:1-2). JESUS WAS ADDRESSING PHARISEES (REPRESENTED BY THE OLDER SON) WHO WERE CRITICIZING HIM FOR RECEIVING AND EATING WITH SINNERS (GENTILES; THE LOST). AT ANY RATE, I’M ONLY USING THE PRODIGAL SON HERE TO DEMONSTRATE THE TRANSITORY NATURE OF THE PLEASURE OF SIN.

Need some help staying modest this summer? Don’t forget @awordfitlyspoken’s 3 part series on modesty!
Check it out – Melvin, one of my Twitter followers, memed me. :0)