When you gaze out across the landscape of the visible church through an earthly, superficial lens, you’ve got to scratch your head and wonder, “Has evangelicalism lost its ever-lovin’ mind?”.

And the answer is to take off those inch-deep dollar store glasses, fire up the electron microscope of Scripture, look long and deep into God’s Word, and reply to yourself, “Of course it has, silly rabbit. What did you expect?”. The Bible is perfectly clear about these things and why they happen.

Exhibit A: The trend in recent years to invite a woman to preach the Sunday morning sermon in church, to the whole congregation (including men) just because it’s Mother’s Day. Not a brief personal testimony, the sermon. This isn’t anything brand new. Hope Adams (though I’m certain she wasn’t the first in this trend) did it at Ed Young, Jr.’s Fellowship Church in 2014. Lisa Harper did it at CrossPoint.tv in 2015. Christine Caine did it at Willow Creek in 2016. Lisa Bevere did it at CRC Cape Town in 2017, and a host of other famous and unfamous women at famous and unfamous churches have been doing it for years, even at churches that normally obey Scripture and don’t let women preach.

This year, Beth Moore has caused quite the stir by hiding in plain sight the fact that she will be “doing Mother’s Day” this coming Sunday, presumably at the Tomball, Texas, campus of the church she attends (founded and pastored by her son-in-law Curtis Jones) Bayou City Fellowship: 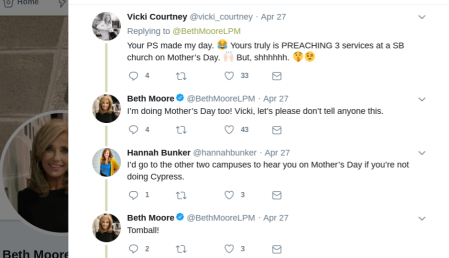 I say “hiding in plain sight” because she has given enough of an impression here that she is preaching the sermon to test the waters and see what the reaction will be, but has worded her tweet vaguely enough that if she meets too much resistance she can still decide to back out of preaching, give a brief word of biblically appropriate Mother’s Day greeting or encouragement to the ladies at another point during the service, and come back and claim with wide-eyed innocence that that’s what she meant all along by saying she was “doing” Mother’s Day. (Someone asked Beth point blank, in a subsequent tweet if Beth’s tweet meant that she would be preaching the Sunday service and Beth did not answer her. If she’s not, why not just say so? And if she is and isn’t ashamed of it, why not just say so?)

I say “presumably” at BCF-Tomball because, even though she publicizes specific details about time and place with other speaking engagements, she has not mentioned (at least not anywhere I can find as of the time I’m writing this) the specific church she’s preaching at on Sunday, and the church hasn’t mentioned on their website that she’ll be the guest preacher. Additionally, unlike other speaking engagements Beth does, this speaking engagement is not listed on the calendar of events at her website and she hasn’t mentioned it (other than the tweet above) on social media. With all this “open secrecy” I will be surprised if the video or audio of her sermon is posted on YouTube and/or the church website.

Why all this cloak and dagger about the highest profile woman in the Southern Baptist Convention, possibly in the entirety of evangelicalism, preaching the Mother’s Day sermon?

Because she knows it’s unbiblical. Because we know it’s unbiblical. And it doesn’t take an electron microscope to see it. It’s right there, in black and white, jumping off the pages of Scripture:

I do not permit a woman to teach or to exercise authority over a man; rather, she is to remain quiet. 1 Timothy 2:12

It couldn’t be more clear. And for pastors who ought to know better to either fall prey to or intentionally perpetuate the serpentine seduction of “Did God really say you can’t preach?”, using Mother’s Day as an excuse to induce a woman to sin by having her deliver the sermon is a slap in the face – to God, to the church, and to women.

What do his actions say to God? “I don’t like Your way and I won’t submit to it. I don’t trust that Your way is right regardless of what the world says. I’ll do what’s right in my own eyes.” It’s the lesson his church learns from his actions as well.

But why is inviting a woman to preach an affront to Christian women? Take a stroll down to verse 15 of 1 Timothy 2:

Yet she will be saved through childbearing—if they continue in faith and love and holiness, with self-control.

Not only does the pastor who invites a woman to preach adulterate the role God has set aside specifically for men, he also denigrates one of the good and holy roles God has specifically and intentionally set aside for women: the role of literal, and spiritual, mother.

Eve shattered God’s perfect, unique design for women by allowing herself to be seduced into rebellion. But are we daughters of Eve forever doomed to bear the shame and guilt of her sin, never to have a role in building the Kingdom? Pariahs, to be shunned and shut out of God’s plan? No, praise God! Through the cross, the good works Christ has ordained for Christian women to do – including mothering our own children and being spiritual mothers to our daughters in the faith – redeem the prestige of women. Mothering, in every sense in which God intended it, raises the role of women back to its rightful place in God’s plan.

And we don’t need men – especially men who are supposed to be rightly leading God’s people – to come along and entice us to mess that all up again.

When a pastor invites a woman to sin by taking over the pulpit, he drags her and the women of his church right back to post-Fall Eden. He trashes the rank and repute of our God-given high and holy role of mother and implicitly says Being a woman isn’t good enough. You have to steal the role of men to be valued and esteemed.

We don’t need to be second rate imitations of men in order to “count”. We need to be first rate, full throttle, take it to the limit women of God. God loves us and values us so much more than to give men a special and amazing role and leave us without an equally special and amazing, yet totally distinct, role. The God who spoke the universe into existence and planned out an unparalleled purpose for every single plant, animal, bacterium, and every other atom of the cosmos, did not leave the queen of His creation roleless. He did not bring us into being only to toddle along after the Hairy Ones trying to copy their every move. How unloving of God, and devaluing to women, would that be? Why would you want to act like a man when God blessed you with the gift of being a woman?

If, by God’s good Providence, you’ve “stumbled across” this article and you’re a woman who has been invited to preach, I plead with you: don’t buy the lie. Say no. Your Savior has a whole treasure chest of good works for you to do as a woman. You are worth infinitely more to Him as the woman He created you to be than you are to the world, or a worldly church, as a cheap knock-off of a man.

Let us be the mothers our own children need, raising up a godly seed unto the Lord. Let us be the spiritual mothers longed for by younger women in the faith, daughters orphaned by Christian women who have abandoned them to take on the role of men. The practice of denigrating women, devaluing our God-given role, disobeying God, and darkening the understanding of the church by inviting women to sinfully take the pulpit must stop in the house of God and be replaced by strong godly women, unafraid and unashamed to flourish in the precious role our Lord has blessed us with.

Why Asking Women to Preach Is Spiritual Abuse by Josh Buice