A week ago today, I was drinking from the fire hose of good teaching and good fellowship at the 2018 G3 Conference: Knowing God – A Biblical Understanding of Discipleship. I not only had the blessing of being able to hear many of my heroes in the faith speak for the first time in person, but I also had the joy of meeting numerous social media friends – finally! – face to face.

Some of the wonderful brothers and sisters I got to hear from: 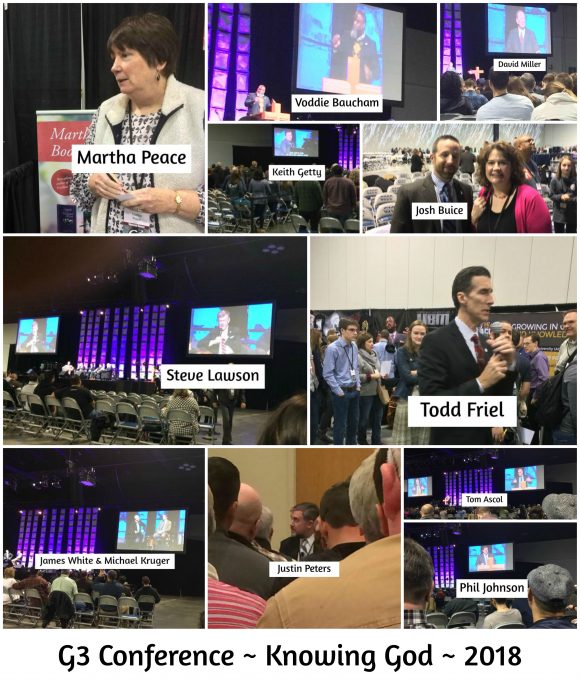 I remarked to a friend that it felt strange to me when readers approached me during the conference to thank me for being a good resource for them. “I’m not really a resource,” I said, “I point people to others who are good resources.” So, in keeping with pointing you to good resources, I’d like to share a little about some of the pastors and teachers I sat under last weekend – not so much about what they taught, but more about how God uniquely crafted and fit each of them into the Body to minister to their local churches, and the church at large, in their own special way. I highly recommend each of them to you.

A superb example to other pastors, Josh has the heart of a shepherd and a servant. He is genuine and humble, and his greatest concern is that His people know and serve God through their local church. I’ve previously recommended Josh here and have had the pleasure of linking to many of his materials.

Tim is someone who has figured out his ministry context and is flourishing in it. He not only serves his church well, but is intent on learning from his church in order to serve it better. Tim’s is one of the handful of blogs I follow regularly.

Kindness and grace personified, David has a way about him of speaking hard truths in gentleness. Due to degenerative muscular atrophy, David uses a wheelchair and had to memorize his entire sermon including the lengthy Scripture passages he cited, which was very encouraging to me for my own Scripture memory. David reminded me of older, small church pastors I have known who are so good at loving and caring for their sheep.

If you’ve ever wondered what biblical meekness looks like, you need to get to know Justin Peters. Calm, kind, graceful, knowledgeable, and with a quick wit, Justin cares deeply about sound doctrine and calling out false teachers because he has a heart for people to be saved and know the truth of the gospel. Justin taught two breakout sessions on the New Apostolic Reformation, and I am overjoyed to report to you that there was standing room only (and there were many standing) for both sessions. What a joy to see Christians getting informed so they can protect themselves and their churches! I have recommended Justin here and have linked to several of his resources. 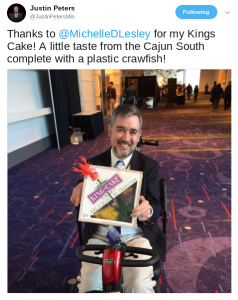 Justin’s a Louisiana expat in the Northwest, so I brought him
some essentials from home: king cake and crawfish :0)

Voddie is intense. He is passionate about preaching and the Scriptures to such an extent you begin to sense that, if he could, he’d grab you by the shoulders and physically stuff you with Scripture and a proper understanding of it. He wants the church to get it. I’ve recommended Voddie here.

Gracious. Godly. Gutsy. That’s the “G3” of Martha Peace. Unlike so many of today’s “divangelistas” Martha is not a young, silly, hyper Barbie doll. She’s older, mature, and sedate, yet still fun to be around. She doesn’t have the perfect figure or the trendiest clothes. She looks and acts like your average, older, wiser sister at church. And that’s a good thing. We need far more mature sisters like that to look up to. It was a blessing to see her breakout sessions full of younger women who want that kind of biblical teaching and example from a Titus 2 woman. I’ve recommended Martha before, based largely on others recommending her to me. Now it’s my pleasure to commend her to you, having personally heard her speak. 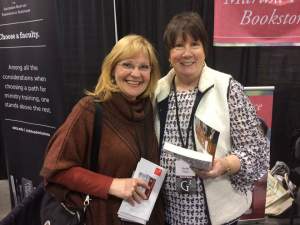 Drs. White and Kruger presented a joint session on the canon of Scripture. Lovable eggheads both, they showcased the fact that Believers don’t have to gullibly check their intellects at the door of Christianity and that academicians don’t have to be godless liberals. They made “doctrinally sound smart” look beautiful.

I thought I was a fairly decent parent until I sat under Paul Tripp’s teaching, but I get the feeling he can make pretty much any parent feel like a failure. There’s a purpose to that: without God’s grace and the empowerment of the Holy Spirit, relying on your own efforts, you are a failure as a parent. Paul wants you to see that so you’ll stop trying to parent in the flesh and parent with the gospel instead so that your children might be saved.

Derek Thomas is the iconic image of an elder statesman pastor, a breath of fresh air standing in stark contrast to today’s cool, hipster, twentysomething pastors. There is a Bible-fueled furnace deep in Derek’s soul that empowers his preaching. He is living proof that formal doesn’t have to equal cold and boring.

This is a man who knows God and wants you to know Him, too. Tom is a regular Joe who’s good at explaining biblical concepts simply and lovingly, like the uncle who taught you how to tie your shoe or ride a bike. I was pleased to learn that he is Southern Baptist as well as the executive director of Founders Ministries, and am looking forward to hearing more from him.

Long one of my favorite pastors, Steve Lawson is the definition of unction in preaching. The man is a preaching machine, and I don’t see how he replenishes all the calories he must burn off in the pulpit. There is an urgency about his preaching that says, “You need to know this, and you need to know it now because it will help you love Jesus more, and you don’t want to wait another second to love Him more, do you?” It’s been my pleasure to recommend Dr. Lawson here. If you listen to preaching and podcasts, you’ll want to add him to your queue.

The man knows his stuff, and he tells it like it is. He’s a straight shooter. That’s the main thing I appreciate about Phil Johnson. There’s no way I could briefly capture the awesomeness that is Phil, so I’ll just leave you with a little tidbit I learned on this trip, that made him even dearer to my heart. He said he was a terrible extemporaneous speaker, but a decent writer, so when he preaches, he writes out his manuscript word for word and reads from it at the pulpit. I’m exactly the same way when it comes to speaking. If you’re not already listening to, and reading Phil, get caught up. I’ve enthusiastically recommended him here.

Equally as important as the wonderful teaching at G3 was the opportunity to meet so many good friends I’d only been able to get to know on social media. I even got to meet a few readers, too! 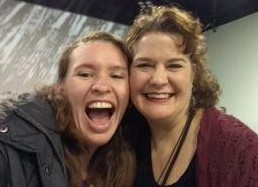 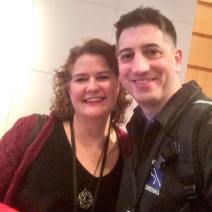 Josh Buice said something during his sermon that really stuck with me: Attending a conference is an unbelievably wonderful experience, but it isn’t church. Church is where we go back to when a conference is over – to do the hard and joyful work of ministry and the long-term labor of love of discipling and being discipled in the local body.

And Josh was absolutely right. God doesn’t call us to be conference junkies, bouncing from event to event because we’re addicted to the high we get from “mountaintop experiences.” That’s not real life. And it’s not biblical life, either. God calls every Christian to be plugged into a local body of Believers. To walk with the same group of people week in and week out through sorrows and joys, sins and victories. 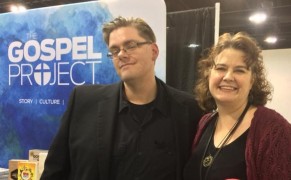 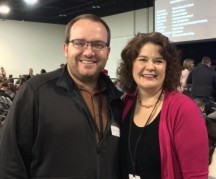 But in another sense, the very reason conferences like G3 are so addictive, is that they are the church. The universal church. The church catholic. The family of Believers we’ll spend eternity with.

I can’t tell you how many times I totally tuned out the preaching or the music and just looked out over that sea of people I’d never seen before – enraptured by the words of  God, praising the name of our dear Savior – and thought, “This is the tiniest little taste of what Heaven is going to be like.” 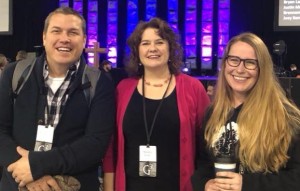 And every time I shrieked with delight at the first glimpse of a precious friend I’d previously known only online, I thought again, “This is what Heaven will be like!” A glorious family reunion with loved ones – those we’ve known personally, those we’ve known from afar, and those we’ve never met before – all bound together by our mutual love, adoration, and worship of Jesus.

Thanks so much to those of you who generously gave financial gifts which enabled me to attend G3. Your investment and kindness meant so much to me, and I hope you’ll be blessed by the way God has grown and encouraged me through this conference as I continue to serve you through this online ministry.

If you ever get the chance to attend G3, I can’t recommend it enough. But if you don’t, you can download the G3 app, listen to all the teaching from past conferences, and soon, from this year’s conference.

The G3 Conference was a wonderful experience, and I hope I’ll have the opportunity to go back. I think the most important thing I learned at G3 is that a Christian conference can do lots of things, but if it doesn’t send you back home loving your own church more and equipped to serve it better, it hasn’t done its job. I came home with both. Thanks, Josh Buice, Pray’s Mill Baptist Church, and everyone associated with the G3 Conference.

3 thoughts on “Report Back: Reflections on G3 Conference 2018”

Today on the blog: "Thou shalt not publicly criticize Southern Baptist leaders." It's jokingly referred to as the "11th Commandment." But it is no joke. It has been the cover for deeds done in darkness that need to be exposed (Eph5:11-13).
With abortion in the news, we wanted to re-post our @awordfitlyspoken episode about the difference between being an abolitionist and being pro-life. Even if you heard this last January, you might want to give this “throwback episode” with our guest Pastor @brettabaggett, another listen. And now you can watch his film, "A Storm Comes Rolling Down the Plain," free on YouTube! (Link and podcast in bio and stories)
Mark your calendars and come join us, July 11-15, for @openheartsinaclosedworld!