Hezekiah to Josiah (2 Kings 21:11)
As you will recall, Judah had had a good king in Hezekiah. He had done his best to do away with idol worship and re-institute the proper worship of Yahweh. But outward reforms cannot change individual hearts, and idolatry was already so entrenched in Judah that when Hezekiah died, the people quickly turned back to their old ways under Hezekiah’s son Manasseh.

Manasseh reigned for 55 years and did more evil than the pagan nations God had originally told Israel to annihilate from the Promised Land. (2 Kings) He was followed by Amon, who was equally evil and reigned two years. By the time Josiah took the throne, the people had been under pagan rule for nearly 60 years. Since Josiah’s reforms (removing idolatry and idol worship paraphernalia) did not begin for another 18 years, the people were actually involved in the practice of idolatry for 75 years.

Jeremiah’s Message
Jeremiah was one of the final prophets God would send to warn Judah about her sin. In fact the first 45 chapters of Jeremiah can generally be summed up as: “Turn from idolatry and back to the Lord to avoid judgment and exile.”

Second Verse, Same as the First
As we read both the major and minor prophets of the pre-exilic era, their messages can sometimes feel very repetitive. To a great extent, they are. There are two reasons for this.

1. God had one, very simple message for His people: repent and turn back to Me. He didn’t have a long list of demands or complicated instructions, just “repent and return.” Even with varied object lessons, there are only so many ways a prophet can say that before you start feeling like you’ve heard it before. God wanted to drive this point home.

2. We need to keep in mind that the book of Jeremiah (and some of the other prophetic books) was not, at the time, a book for people to sit down and read from beginning to end. Jeremiah is a collection of sermons (and some writings) given in various places to various audiences over a period of about fifty years. Today, we’re looking at a representative sample of Jeremiah- chapter 7.

7:1 (Matthew 4:9)–
Notice where God told Jeremiah to preach this sermon: in the gate of the temple. Think about it. These people are supposedly coming in to worship God, and here God is (speaking through Jeremiah), at the entrance to His own house, speaking directly to them about what He wants from them. Do they listen? Obey? No, they walk blithely past Him into His house and do things their way. 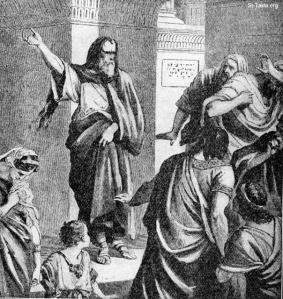 Why? Because they didn’t want an actual relationship with God. They wanted to wallow in the sin of their idol worship while still getting all the benefits (agricultural blessings, protection from enemies, etc.) they thought God would continue to provide if they went through the outward motions of sacrifices and going to the temple. This blending of idolatry with the worship of God is called syncretism.

Syncretism is alive and well today. There have been churches that have held Christian-Islamic worship services, churches that teach yoga (a Hindu worship practice), even when we join ourselves or our churches to “Christian” churches whose doctrines aren’t biblical, we are guilty of syncretism.

Let’s not forget what Jesus told Satan in the wilderness when Satan tempted Jesus to worship him:

You shall worship the Lord your God
and him only shall you serve.’ (Matt 4)

After all Jesus did for us to save us from our sin, it is the ultimate understatement to say that He ALONE is worthy of all our worship, love, and devotion.

God urged the people not to trust in the empty words and false beliefs they wanted to believe and had convinced themselves were true–namely, that since the “temple of the Lord” was in their midst and they were still attending and making sacrifices, God’s favor still rested on them– but to believe and act on what HE was actually telling them: repent and return.

God exhorts us to do the same thing. We are not to be people who “will not endure sound teaching, but having itching ears they will accumulate for themselves teachers to suit their own passions, and will turn away from listening to the truth and wander off into myths.” (2 Tim.) We are to believe and practice what His word says -not what we desire to be true- even if it’s difficult.

11-20
Ever since God had brought Israel out of Egypt nearly a thousand years earlier, He had been warning them of the consequences of idolatry. Here the time of His patience is almost at a close, and He will soon be carrying out those consequences. God even tells Jeremiah not to pray for the people. He knows they will not repent.

In a similar way, throughout our lifetimes, God persistently calls to each of us sinners to come to Him in repentance and faith in Christ. He graciously and patiently calls to us again and again, but, if, by the time we die, we have refused to surrender to Him, He will execute judgment on us.

How much better to turn to Christ early and experience the sweet fellowship that comes from being forgiven for our sin and reconciled to God. Jeremiah saw this and wanted this for his people, but they would not have it. We see in chapter 9 how grieved he was about this.

21-26
“Add your burnt offerings to your sacrifices, and eat the flesh”- The burnt offerings were completely consumed by fire. Parts of the sacrifices (or peace offerings) were eaten by the one offering them. What God is basically saying here is, “Take what you would have offered as a burnt offering and turn it into a sacrifice and go ahead and eat both of them. You might as well just eat them, because I’m not going to accept them.”

God again takes the people back to the Exodus and reminds them that when He initially brought them out, and all during their wilderness wanderings, there was no sacrificial system. All He asked of them was to obey Him and walk in His ways. That was His priority. That was what came first: their love for Him and obedience to Him. The sacrificial system came later. Sacrifices were to be a natural outward expression of the people’s inward love for God.

It is no different for Christians. God is not interested in mere outward behavior, service, or religious practices. He wants our hearts. Our outward actions are to reflect the love for Christ that is already present in our hearts.

27-28
Unfortunately, even though Jeremiah faithfully preached God’s word, the people would not listen. Did this mean Jeremiah was a failure or that God was disappointed in him? No. He did exactly what God told him to do, and that’s what God judges His servants by, not the results.

We will experience the same thing at some point if we faithfully preach the gospel to people and stand on God’s word. People will reject the gospel, preferring to live in sin. People who call themselves Christians will reject the truth of God’s word no matter how clear it is or how nicely we present it to them. Does this mean we are failures or that God is disappointed in us? No. God considers us faithful if we believe, obey, and share the gospel. The results are up to Him.

Join the @bezeugen tract club and share the gospel MORE.
In today’s edition of The Mailbag: “When is it time to leave the SBC?“
Ditch the “pro-life” movement. Become an abolitionist.