With the movie Son of God releasing in theaters on February 28, for the next three Thursdays I’ll be rerunning a three part series I wrote on last year’s History Channel miniseries, The Bible. Son of God is Roma Downey’s and Mark Burnett’s movie about Jesus that is drawn from The Bible’s scenes pertaining to His life and ministry, as well as deleted scenes that did not make it into the miniseries.

During and after The Bible’s run last year, Downey and 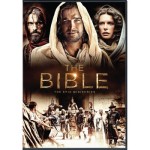 Burnett received quite a bit of criticism for the show’s inaccuracies and copious amounts of artistic license taken. It would give me great joy to discover that they took those critical reviews to heart and fixed in Son of God the rampant errors and faulty theology of The Bible, but since they are using scenes and deleted scenes pulled directly from the miniseries, it doesn’t sound like they’ve re-shot and corrected anything.

Since I have not seen Son of God, I’m not comfortable suggesting Christians boycott it, but I would like to throw a few things out there for your consideration as you make your decision about whether or not to see this movie:

1. Do you boycott products, organizations, restaurants, stores, actors, or political candidates who support abortion, the homosexual agenda, or any other sin?

Well, taking God’s name in vain, the third Commandment, is still a sin. A big one. And it’s not limited to saying “OMG” or

using God’s name in an expletive. Far worse than those is attributing to God things that He has not said or that are not true of His nature and character. This happened a myriad of times in The Bible, and, unfortunately, I anticipate that the same will be true of Son of God.

Are you being consistent if you boycott Girl Scout cookies and Starbucks yet give your money to people who claim to be presenting the Jesus of Scripture but put words into His mouth that He did not say and philosophies into His teachings that He did not espouse and which conflict with God’s word?

2. If you do choose to see Son of God, or if you have friends

who see the movie, make the most of the opportunity to start conversations for sharing the gospel and pointing people to the true Jesus of Scripture. God can use anything to draw people to Himself, but they can only be genuinely born again if someone tells them the truth of the gospel and they put their faith in the Jesus of the Bible.

3. Do your homework. If you choose to see the movie, read one or more of the gospels (Matthew, Mark, Luke, and John) before and afterwards. Did Jesus really say to Peter, “We’re going to

change the world,” as He does in the movie? If so, which verse says that? If not, what did Jesus actually say, and why? If you choose to see the movie, don’t just take for granted that what you see on the screen is true. Get your Bible out, dig through it, and sharpen your discernment skills. Be one of those Bereans Luke praised so much for comparing what Paul preached to what Scripture said.

UPDATE: After the original publication of this article, Downey and Burnett announced that they would be removing all of the scenes from Son of God that contained the actor portraying Satan due to last year’s controversy over his striking resemblance to President Obama.

A reader asked for my reaction to this announcement. My remarks to him were as follows:

Since I haven’t seen the movie, it’s hard for me to give a really fair comment on this, but I’ll take a stab at it. I am much more concerned about the theology of leaving out Satan than I am about the politics.

When I read a statement like this (and granted, these are the reporter’s words, not Roma Downey’s words):

“Eager to avoid rehashing the drama, producers Roma Downey and Mark Burnett decided to leave the character out of their film…”

it tells me they are more concerned with political fallout and controversy than they are with adhering to Scripture. (In my opinion, the bulk of The Bible miniseries bears out that they were not overly interested in adhering as strictly as possible to Scripture.)

When I read a quote like this from Roma Downey:

“‘It gives me great pleasure to tell you that the devil is on the cutting-room floor,’ …’This is now a movie about Jesus, the son of God, and the devil gets no more screen time.” and, “For our movie, Son of God, I wanted all of the focus to be on Jesus. I want his name to be on the lips of everyone who sees this movie, so we cast Satan out.”

it tells me that she and Mark Burnett don’t have a full understanding of the meaning and implications of Christ’s life, ministry, death, and resurrection. The story of Jesus goes much deeper than just words on a page. Everything He said and did had eternal, omnipotent, prophetic, God-magnifying, salvific, miraculous foundations, impact, and effects. We’re not talking about an entertaining little story like The Three Bears or Gone With the Wind, here. The story of Jesus turns the universe inside out for every atom of everything that’s ever existed, including every single human being who has ever walked the planet. You can’t just cut a little here and cut a little there and sew the edges back together without the crippling the impact of the gospel.

To say that now that they have cut out the scene with Jesus being tempted in the wilderness (I’m assuming this is the main scene they’re referring to. I can’t remember which other scenes may have had Satan in them.), NOW this movie is all about Jesus just further demonstrates their lack of biblical understanding. Are they saying the wilderness temptation was not “about Jesus”?

That incident was not about Satan. It was about Jesus. It is one of the major incidents in which we see that Jesus is both fully God and fully man. It also encapsulates the main point of the entire Old Testament sacrificial system– that Jesus is the perfect Lamb of God without blemish or spot, the only sacrifice that could permanently take away our sin. He could not have been our sacrifice for sin had He given in to Satan’s temptations even once. Finally, it is a demonstration to us that Jesus understands the struggle with sin that we go through because He went through it Himself, personally (Hebrews 4:15).

To sum up, I think leaving Satan out has worse theological consequences than the political fallout for leaving him in.

Should you see (and financially support) this movie? That’s between you and God. But whether or not you choose to see it, as with anything else in life, use it as a springboard for sharing the gospel and studying God’s word more deeply.

What do you think? Should Christians boycott Son of God?

6 thoughts on “Should Christians Boycott “Son of God”? Three Things to Consider ~ UPDATED”

Today on the blog: Have you ever wished your church would grow? Maybe your pastor talks about church growth from time to time? What should a church do if it wants to grow? (Link in bio)
Every Wednesday, I post a new lesson in our current Bible study on the blog, and a link to that lesson on social media. I also post the suggested memory verse meme for that lesson on social media, like the one you see above. The memory verse is chosen to reflect a specific point from the lesson. So, if you see the memory verse meme and you have a question about that verse, click the link for my blog in my bio and find the lesson mentioned in the memory verse meme, and you will probably find the answer to your question. :0)
Today on the blog: Lesson 4 of Judges.