I post a lot of memes on my social media pages, mostly Facebook and Instagram. I usually post four Bible verse memes every weekday morning on Facebook and other miscellaneous memes (usually a theological quote or Christian humor) at various times on all my social media platforms. Over the course of the last couple of years, I’ve gotten some critical comments about a few of these memes, which, I think, stem mostly from misconceptions people have about what a meme is and the general understanding of the function of memes on social media. I’d like to try to clear up some of those misconceptions today.

A meme is simply a picture with words superimposed on it (usually a couple of sentences, max), like the ones in the collage above, that you see on social media. The function of a meme is to convey a brief thought, quote, or joke. Memes are not books, articles, theses, or even long Facebook posts. They are not meant to exhaustively cover every aspect of the thought they present. Reading a meme is kind of like eating one grape (or even reading one verse of Proverbs!). The grape is good and nutritious in and of itself, but it is not: a bunch of grapes, a full meal, a well-balanced diet, or the buffet at Golden Corral. It is simply a grape. Appreciate it for what it is and don’t criticize it for not being something it isn’t.

The criticism I most often receive about Bible verse memes (a picture with a Bible verse on it) is that the verse is not in context. Of course it’s not in context. That’s the nature of a meme- it contains only a brief thought or quote (which is why you don’t usually see an extraordinarily long verse {like Esther 8:9} on a meme, either).

BVMs are not meant to be a Bible study, sermon, or exegesis of a passage of Scripture. The daily BVMs I post are to jog your memory about passages you’ve already studied or to pique your interest in studying the passage surrounding the verse on the meme. When I post a BVM, I do my best to make sure of three things: a) the meme contains a whole, not partial, verse, b) the meme contains the reference so you can look up the context for yourself, c) the picture that goes with the verse does not suggest a misleading meaning to the verse.

Interestingly, the only verses I seem to receive the “out of context” criticism about are Jeremiah 29:11 and Philippians 4:13. (Shouldn’t we want all Bible verses to be in context?) I’m fully aware that many Christians out there, and even false teachers, use these verses out of context. The fact that many people misunderstand or twist these verses to fit their own agendas does not negate the fact that these are still Holy Spirit-breathed portions of the Bible. I refuse to surrender these verses to those who abuse them by declining to post them. God’s Word is God’s Word, and even one verse can stand on its own, qualitatively, as the Word of God. The reader is the one who has the responsibility to look up those verses and understand and use them in context.

Going back to the grape illustration, the thing to remember is that a meme is not meant to exhaustively cover every aspect of the thought it presents. If I post a meme that says, “The grass is green,” that does not mean:

—Only grass is green
–Everything in the world is green
–There aren’t other things in the world that are other colors
–I hate things that aren’t green
–Grass should never be mowed, fertilized, watered, etc.
–Grass can’t be other colors because you could dye it or set it on fire

Also, simply stating that the grass is green does not obligate me to explain photosynthesis, suggest landscaping techniques, or debate zoysia versus Kentucky bluegrass. There’s certainly a time and a place to go into detail about issues (which I do every day on the blog), but it is also okay to make simple, true, stand alone statements without having to comment on every intricate aspect of the topic.

This is something you kind of have to get a feel for through exposure to memes, but I’ll do my best to explain.

I can’t speak for everyone who shares memes, but the rule of thumb for my social media pages is that you will never see me positively quoting or promoting the beliefs of someone who’s well known to be a false teacher or otherwise theologically aberrant by biblical standards. So if you see a meme on my page that contains a picture of a famous false teacher, a non-Christian actor, politician, etc., it should be a given that I am not promoting his or her false beliefs. The meme is making another point, which you will need to glean from context or ask politely about. 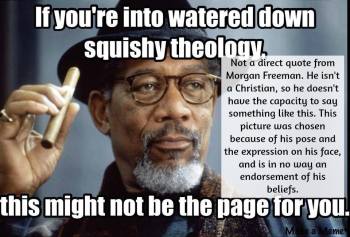 Most of the memes I share were not made by me. I see them – shared by a friend or a page I follow – in my social media timeline and I share them, just like you do. Most of the time I don’t share them immediately. They sit in my file for days, weeks, or even months before I get around to sharing them.

At that point, I can’t remember where I found them, so I can‘t type out a caption crediting the person who made it (if I even know). (If you design memes and you want credit for them, my advice is to watermark the meme with your name or website.) So, if you see me share a meme with no attribution, I’m not in any way trying to plagiarize it or claim that I made it any more than you would be if you shared a meme like that. All of the memes I create are watermarked with my website address (see collage above). If you see me share one that doesn’t have my website on it, you can safely assume I did not create it.

I hope this helps clear up any misunderstandings you may have about any of the memes I post on social media. Memes are just little nuggets that are meant to be humorous or thought provoking. Let’s let them be what they are, not expect them to be what they’re not.