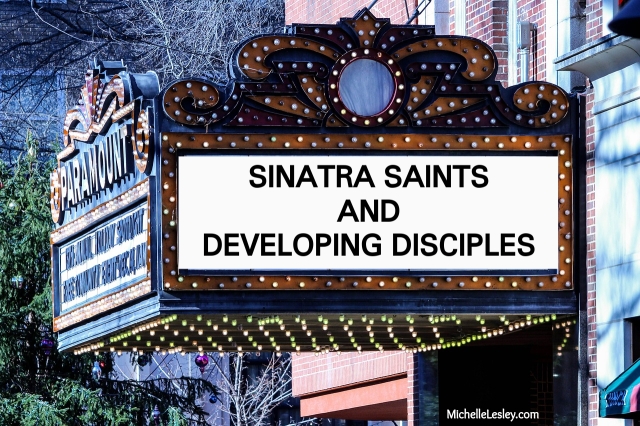 My friend, who’s also in women’s ministry, and I were discussing a phenomenon we’re seeing more and more among professing Christian women (and among men, too, I’m sure). I call it “Sinatra Sin-drome”.

Most of us are too young to be able to remember Frank Sinatra in his heyday, but one of the songs he was best known for was My Way. The lyrics open with a man who’s near death looking back over his life. He recounts his adventures and regrets, the good times and the bad, but no matter what came his way, he faced life on his own terms. “I did it my way,” is the refrain woven into the fabric of the entire song. The last stanza is especially telling:

For what is a man, what has he got?
If not himself, then he has naught
To say the things he truly feels and not the words of one who kneels
The record shows I took the blows and did it my way.¹

This man kneels all right. He kneels at the altar of self. Nobody else is going to tell him what to do. He’s going to do what he wants to do.

Most of the women my friend and I were discussing are either savvy enough or self-deceived enough that they would never dream of even thinking in these clear-cut terms, much less stating them so boldly. And yet, for many, their hearts beat to the rhythm of My Way.

One example of this kind of mindset – though it may have been an isolated incident in the lives of some women – came out in some of the comments on my recent Mailbag article, Should Christian women cover up while breastfeeding?. The sentiment behind the words from several women was, “What the Bible says about the shame of nakedness and denying self to serve others means less to me than: the law that says I have a right…the culture where I live that says it’s OK…my personal experience with the way my baby nurses that demands that I not cover up.”

It came out in a rather puzzling conversation I had with a reader, “B”, who sent me the link to my article on Priscilla Shirer and demanded to know why I think Priscilla is a false teacher (even though the article, which “B” claimed to have read, clearly demonstrates from Scripture why she’s a false teacher). It wasn’t that “B” didn’t have the information and Scriptures right in front of her, it was that she didn’t like what Scripture says about Priscilla. She loves Priscilla Shirer, so she’s willing to put her own feelings above what Scripture says.

It comes out constantly with the issue of women preaching to, teaching, and exercising authority over men in the church setting in violation of 1 Timothy 2:12. “I feel called to preach.” “It’s OK if I teach this co-ed Sunday School class because I have my pastor’s/husband’s permission.” “I can preach a sermon to a mixed audience at this event, because it’s not in a church, it’s at a Christian conference.”

And it always comes out when the topic is Christian women dressing modestly. “I can wear what I want! If men have issues with lust, that’s their problem. They can just avert their eyes.”

Now, let’s be clear, any time you or I or anyone else sins, we are – consciously or subconsciously – saying through that sinful thought, word, or action, “I don’t care what the Bible says about this, I want to do what I want to do.” I’m sure my own words and actions have shouted that rebellion against God loud and clear on many occasions.

But there’s a difference between…

A Developing Disciple
A Christian who is striving to do things God’s way, who occasionally stumbles into sin or gives in to a momentary weakness of the flesh. When confronted with what Scripture says on the subject, she sorrowfully repents and submits to God’s Word.

A Sinatra Saint
A person who claims to be a Christian and generally aligns with what the Bible says as long as it agrees with her. When confronted with what Scripture plainly says about her beliefs or actions, she doesn’t repent, but digs in her heels and attempts to justify herself, often with claims like, “Well that’s just your opinion/interpretation,” or “That’s not really what that passage means.”

Sometimes it can be hard to come to grips with a difficult passage of Scripture that challenges something you’ve believed or done your whole life. (Hey, I’ve been there. It’s no picnic.) But the difference between a Developing Disciple and a Sinatra Saint is that the Developing Disciple will grapple with the passage with an overall desire to properly understand and submit to that Scripture, even if it’s hard, while, for the Sinatra Saint, it’s a no-brainer. Her opinions, feelings, or personal experiences win. Because it’s not just that one isolated issue, it’s her whole outlook and approach to life.

Am I saying that a woman who thinks it’s OK to let it all hang out while she’s nursing her baby isn’t saved? Of course not. What I’m saying is that if your general approach to life is, “I’m doing it my way and if the Bible wants to align with me, fine, and if not, that’s fine, too,” you’d better start examining your heart pretty carefully against Scripture to discover whether or not you’re actually saved.

Why? Because that’s what the Bible says. And if you claim to be a Christian, the Bible is your authority in life, not yourself.

And I will give you a new heart, and a new spirit I will put within you. And I will remove the heart of stone from your flesh and give you a heart of flesh.
Ezekiel 36:26

Therefore, if anyone is in Christ, he is a new creation. The old has passed away; behold, the new has come.
2 Corinthians 5:17

This isn’t just flowery, poetic language. When Christ saves a person, he literally changes that person into a new type of creature with a different way of thinking, different likes and dislikes, different goals, different responses.

Imagine if you had a magic wand and could change a house cat into an elephant. When the cat was a cat, he wanted to chase mice. Now that he’s an elephant, he’s afraid of mice. As a cat, he craved tuna, but as an elephant, he turns his trunk up at meat, preferring an herbivorous diet. No more baring his claws to scratch at an enemy; now he tramples and uses his tusks to ward off danger. The coziness of hearth and home? Nope. The elephant prefers the wide open savanna.

And all of that is nothing compared to the radical transformation that takes place in the heart of someone who has been genuinely regenerated by Christ.

You are of your father the devil, and your will is to do your father’s desires.
John 8:44a

Now may the God of peace…equip you with everything good that you may do his will, working in us that which is pleasing in his sight, through Jesus Christ, to whom be glory forever and ever. Amen.
Hebrews 13:20a,21

Christ changes our behavior from willful disobedience to joyful obedience:

Whoever says “I know him” but does not keep his commandments is a liar, and the truth is not in him,
1 John 2:4

And by this we know that we have come to know him, if we keep his commandments.
1 John 2:3

Christ changes us from His enemies to His friends:

You adulterous people! Do you not know that friendship with the world is enmity with God? Therefore whoever wishes to be a friend of the world makes himself an enemy of God.
James 4:4

The friendship of the Lord is for those who fear him, and he makes known to them his covenant.
Psalm 25:14

You are my friends if you do what I command you. No longer do I call you servants, for the servant does not know what his master is doing; but I have called you friends, for all that I have heard from my Father I have made known to you.
John 15:14-15

Why do you not understand what I say? It is because you cannot bear to hear my word. You are of your father the devil, and your will is to do your father’s desires. He was a murderer from the beginning, and does not stand in the truth, because there is no truth in him. When he lies, he speaks out of his own character, for he is a liar and the father of lies. But because I tell the truth, you do not believe me. Which one of you convicts me of sin? If I tell the truth, why do you not believe me? Whoever is of God hears the words of God. The reason why you do not hear them is that you are not of God.”
John 8:43-47

Has there been a radical transformation like that in your heart and life as a result of repenting of your sin and placing your faith in Christ? You can be your own authority and have “I did it my way,” as the theme song of your life, but you can’t do that and be a Christian too. The two are mutually exclusive. It doesn’t matter if you’ve walked an aisle, made a “decision”, prayed a prayer, been baptized, joined a church, are a “good person”, and do all sorts of good deeds, if your heart and your desires aren’t generally oriented toward Christ, growing toward in Him and away from self, you aren’t saved.

But that can be remedied right now. The gospel is right there, ready for you to repent of your sins and believe. Take some uninterrupted time alone with God and measure your life and your heart against the plumb line of His Word. Is it “I did it my way,” or “I’ll do it Thy way.”?

Are you a Developing Disciple or a Sinatra Saint?

Just sitting here...reflecting. :0)
Oh no, the dreaded “S–word “– submission! Check out @awordfitlyspoken’s latest episode, “Why Is Submission So Scary?“.🍏
🚫🎯🚫