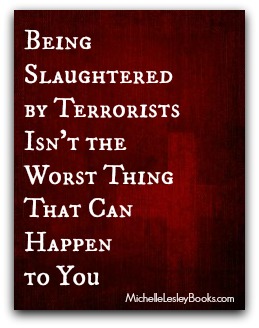 Everybody seems to be walking around scared these days. I’m a little scared, myself. It’s understandable. There’s a lot of scary stuff happening. Boko Haram. Ebola. ISIS. The persecution of Christians abroad, and, increasingly, here at home.

Terrorism, suicide bombers, the seemingly daily acts of violence that take the lives of innocent bystanders– that all used to happen over there. Thousands of miles across the ocean. And all we had to do to make it go away was turn off the TV, click over to Farmville, or put down the paper. Problem solved. It was unfortunate, but didn’t really touch our lives in any meaningful way.

Now we know that there are terrorists living among us right here in the United States, as well as those trying to infiltrate our country by stealthily crossing our borders. When will the next beheading or 9-11 take place on U.S. soil? Who will the next victim be? Will it be you? Will it be me? Will it be thousands of us in one fell swoop?

Any reasonable person would be afraid of that.

And do not fear those who kill the body but cannot kill the soul. Rather fear him who can destroy both soul and body in hell. Matthew 10:28

We’ve got bigger fish to fry in the fear department. Even though it would be awful, the worst thing that could happen to someone is not being killed or even tortured by a terrorist. The worst thing that could happen is for someone to spend an eternity in Hell because she has rejected Christ (which should tell you something about how horrific Hell is).

If you have never turned from your sin and placed your faith in Christ’s death, burial and resurrection as payment for the penalty for your sin, how you’re going to die is the least of your worries compared to what’s going to happen to you after you die. That should scare the living daylights out of you.

The good news is, Christ offers to forgive you today. His goodness for your badness. His purity for your sinfulness. His grace for your gross. He will set you free from your sin so you’ll no longer fear standing before Him on the day of judgment.

So what’s left to fear? Nothing.