Hi, friends. I wanted to send out a brief heads up and a prayer request. As you might have heard on the news, Hurricane Barry is impacting south Louisiana. As of Saturday morning (7/13), when I’m writing this, the models (see above) have the track skirting to the west of Baton Rouge, where I live, but they are still predicting 10-15 inches of rain. 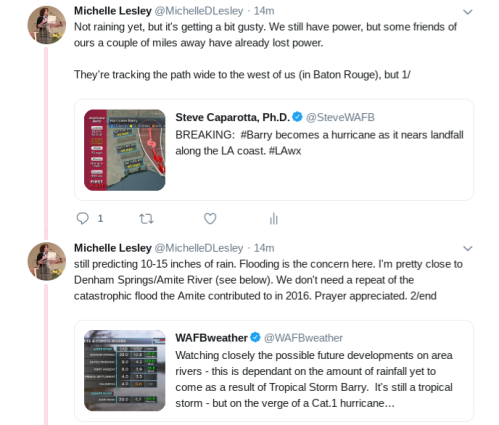 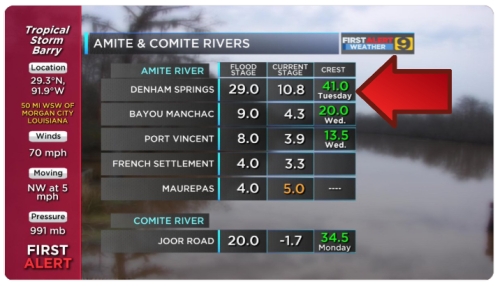 Everybody in my area would greatly appreciate your prayers. The main concern is flooding, since the Mississippi River has been at flood stage for so long. Additionally, we had a major flood in 2016 – to which the Amite River (see pic above) was a major contributor – and a few people in this area still aren’t back in their homes from that. (The Amite is just a couple of miles from me. The Mississippi is 15ish miles from me.)

Sunday 11:30 a.m. Update: Barry has finally arrived and brought some rain with him, but, to be honest, we’ve had regular thunderstorms that have been worse. The only way this storm seems different is the occasional minor gust of wind. We did have 3 or 4 tornado warnings about 90 minutes ago (after, of course, I sent my 19 year old to the store for a gallon of milk for breakfast! Mom of the year, here.) I don’t know if any actually materialized or touched down, but we didn’t see any if they did. A few twigs and sticks have fallen out of our trees.

If you caught the Fox News report on Barry from Baton Rouge this morning, why weren’t you at church? :0) Anyway the reporter was standing on the (Mississippi) river side of the levee and you could see that the water level was up past the tree line. That’s not because of the hurricane. That’s because the river has been at flood stage for a while. It has looked like that for weeks. That’s good news because that’s the most dramatic shot they could find to get on camera. So far we haven’t heard of any flooding in my immediate area, and they have re-forecast the crest of the Amite River at Denham Springs (see pic above) to 24 feet which is below flood stage.

At my house, we still have power and internet. Our satellite has gone out, but if you have satellite TV, you know that it goes out any time it rains anyway. Hopefully, Barry is on his way out like an unwelcome house guest. :0)

The heads up part is that the winds and flooding may cause us to lose power, so if you don’t see me blogging as usual this week, it’s not that I suddenly became a millionaire and ran off to Hawaii. :0) I’ll be back as soon as power is restored and things are settled down.

This week’s Mailbag article is already pre-scheduled and coming your way tomorrow.

Blessings to you and thanks for your prayers.

Here’s one you can share with your pastor, but it’s helpful for all church members. Six ways to protect your church from false doctrine. Listen in to the latest episode of @awordfitlyspoken!
Women with open Bibles. That’s what I like to see!📖
But the Lord God called to the man and said to him, “Where are you?” And he said, “I heard the sound of you in the garden, and I was afraid, because I was naked, and I hid myself.” Genesis 3:9-10
2 Corinthians 10:5🧐