One of the reasons people sometimes give for not believing that the book of Jonah is literally true is the mass repentance of the Ninevites.  If you’ll recall, the city of Nineveh was huge for its time—120,000 to 600,000 people (by the way, if you’re wondering where this figure comes from, check out 4:11.  Some scholars believe the phrase “120,000 persons who do not know the difference between their right and left hand” refers to the children of Nineveh, and they add on extra people to account for teens and adults.  Some believe that phrase is a metaphor for being spiritually blind and leave the number at 120,000.  Others take the size of Nineveh, perhaps 60 miles in circumference, divide the area of the city into square yardage and assign a certain number of people per square yard based on population formulas.  Anyway, it was big.)

But when people say Jonah’s story couldn’t be true because such a large number of people would never repent, they are essentially denying the character and/or the power of God.  Think about it—repentance is an act of God.  Every single one of us is born into the “default mode” of a sin nature.  Nobody has to teach us how to lie or be selfish or be disobedient; we just do those things naturally.  We do not repent of our sin and turn to Christ in faith unless God first draws us to Himself (John 6:44).  So to say that a large number of people would not repent is to say either: a) God is not capable of drawing that many people to Himself for repentance (we know that’s not true from verses like Job 23:13 and Psalm 135:6), or b) that God would not want to draw that many people to Himself (which we know is not true from verses like Ezekiel 18:23, 33:11, and II Peter 3:9) and, therefore, would never choose to do so.

We also know, just anecdotally, that God does sometimes draw people to Himself en masse.  Ever heard of the Great Awakening?  The Welsh Revival?  Billy Sunday?  Acts 2:41? 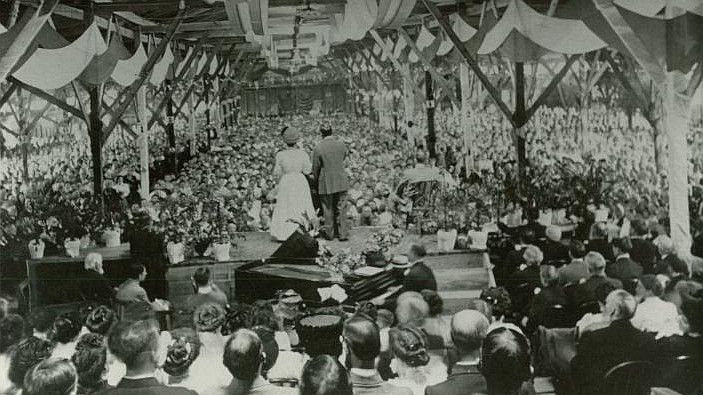 Before He ever called Jonah the first time, God was already at work in Nineveh, stirring the people’s hearts—and the heart of the king—to be ready to repent when they heard His word.  And He did His job well.  Notice in verse 5, it says that the people of Nineveh believed in God.  They are the ones who first initiated fasting and putting on sackcloth and ashes.  It wasn’t until after this that Jonah’s preaching reached the king (6).  He was then also convicted, fasted in sackcloth and ashes personally, and then codified these acts of repentance into a three day law.  This wasn’t a king trying to score popularity points, either.  Kings back then, especially pagan ones, did as they pleased, including killing off their subjects if they felt like it.  This was entirely an act of God.

All of which might lead us to wonder, if God desires for all people to come to repentance, and God is capable of drawing both individuals and large groups of people to Himself, why doesn’t He just go ahead and draw everyone on the planet to such an irresistible degree of conviction and repentance that everyone gets saved, and no one ever has to spend eternity in hell?

And, truth be told, it’s not my business to worry about it.

Because what I do know is:

My business is to love Him and obey Him (John 14:15) and let Him handle everything else.

I just wish I were better at that.

What are some evidences God may be drawing an unsaved person to Himself?  How can you be ready to share the Gospel with that person?

Repent: of any time you have thought God was wrong about something.

Request: that God give you the ability to trust Him even when you don’t understand His ways.

Seek God: For opportunities to share the Gospel with others.