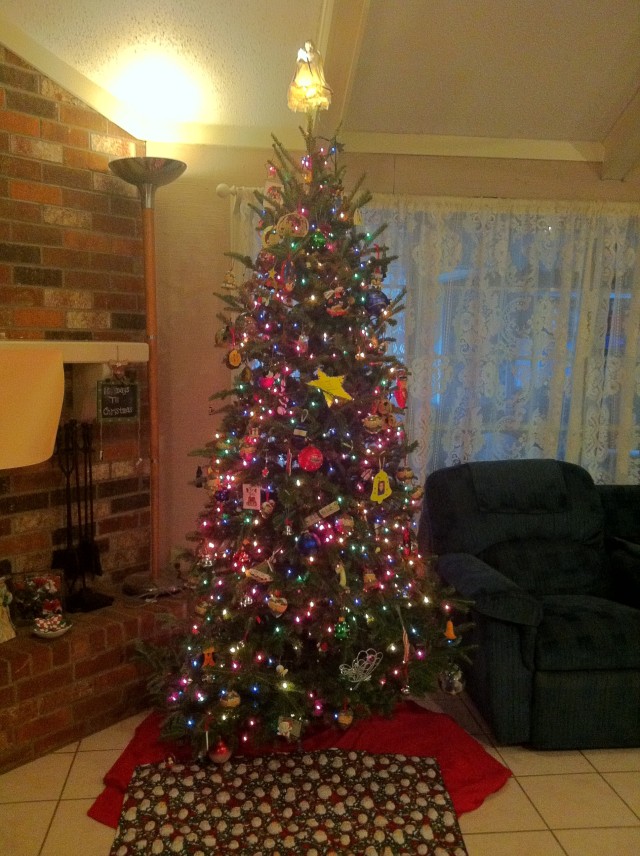 Christmas always comes with some drama. Ripped from the pages of Facebook, here’s the epic saga of my tree decorating of 2013…

Went searching for problem strand. Determined it was one of two strands at bottom of tree. Figured out which one it was. Carefully disentangled said strand from branches and ornaments. Discovered kids had hung ornaments on light strand. Discovered that 10 year old, despite a lifetime of instruction, is still hanging multiple ornaments on a single branch like so many bunches of ripe cherries. Discovered it is much easier to take lights off a tree when there are no ornaments on it. Discovered a 44 year old spinal column ain’t what it used to be.

Plugged new strand of lights into end of previous working strand. No worky. Prayed. Contemplated tree with no lights on bottom branches. Imagined offspring in years of therapy due to improperly lit tree. Prayed again. Considered that this was probably the stupidest prayer God had ever heard. Replugged a different way. Worky. Restrung working strand of lights. Yay. Tree is now completely lit.

Redecorate approximately 40% of tree. Discover angel topper now at right face instead of facing front. Climb on hearth to rotate angel. Tree drops more jingle bells. Due to rotation, tree is now too close to couch. Perform origami on spinal column again and attempt to slide tree closer to fireplace. Foot of tree stand gets hung up on edge of a tile. Tree sways but stays in tact. Operation “Outsmart Christmas Tree” complete. Merry Christmas to me :0)

My husband says the angel looks like it’s
about to launch into orbit!

Oh no, not again!

Still not the picture perfect tree, but we love it!

This year all the lights stayed on, but the tree ended up being a little shorter than we liked, so I wrapped up a milk crate like a present and the tree stand is sitting on top of it. Also, the angel topper that we’ve had since we got married gave up the ghost a couple of years ago, so we had to replace her with a new one whom we’ve affectionately dubbed “disco angel” due to her LED lighting. (Yes, I know real angels don’t look like that. Don’t @ me. :0)

Topics for @awordfitlyspoken?
In today’s edition of The Mailbag: The Protestant Reformation is the reason you're Protestant today instead of Catholic. It's the reason your church has a biblical theology of salvation, eternal life, the Lord's Supper, baptism, the church, and the priesthood of the Believer. It's the reason you have a Bible in your own language.
My son & DIL got their wedding pix back. That third one is still my fave.