We had a huge storm come through yesterday that knocked out our power for almost seven hours, so I wasn’t able to finish up the new article I had planned for today, but I hope you’ll enjoy this article from the archives. 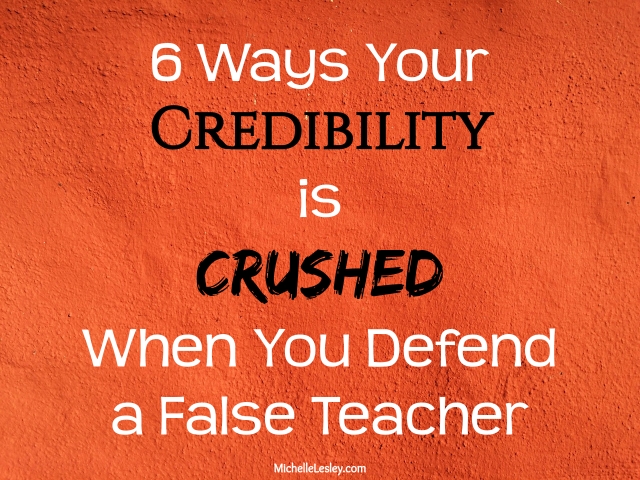 It’s so predictable it would be almost comical if it weren’t so wearisome and worrisome. Every time I write an article about a false teacher or mention on social media that someone is a false teacher, her disciples come out of the woodwork to defend her.

Not only are the same arguments raised repeatedly, but they’re raised in the same ways, ways which leave the person who’s making the argument without a shred of credibility. And if you want your argument to be believed, the first thing you’ve got to be is credible.

Lawyers know this. That’s why, when they select witnesses to testify in their cases, they prefer to choose people who are morally credible and/or factually credible. A morally credible witness is someone who’s likely to be believed based mainly on her reputation as an honest, upstanding person. A nun. A judge. A sweet little church-going grandma. A factually credible witness’ personal reputation might not even be at issue. She’s someone who’s believable because of the airtight factual information she’s able to present. Maybe she’s an expert in the field in question, or she’s in possession of receipts or videos or some other form of tangible irrefutable evidence.

When it comes to biblical doctrine and apologetics, there is only one witness who is morally and factually credible: God. You and I don’t have a moral leg to stand on because we’re sinners, so we can’t expect others to take our word for it in doctrinal debates simply because we’re such swell gals. And as far as the facts and truths of Christianity go, God is the ultimate expert witness, because He is the Author of those facts and truths.

So when we’re engaged in a discussion about what is Christian and what is not, our only feasible and credible position is to put God’s written Word – His testimony – center stage, stand off to the side, point a finger at it, and declare, “Thus saith the Lord.” It’s an open and shut case.

1.
Rejecting the Authority of Scripture

This is a very real, serious, and pervasive problem among many professing Christians today. You’re fine with obeying Scripture – right up to the point where it disagrees with you or interferes with something you want to do. That’s not obedience, and that’s not Christianity. That’s the religion of you: you being your supreme authority, the lord of your life, the arbiter of what’s right and wrong.

Christianity is about surrendering everything about yourself to Christ and doing what He says to do in every circumstance. If He says, “Go,” you go. If He says, “Don’t,” you don’t. If He says, “Jump,” you say, “How high?”, and then you jump. You don’t call the shots. He does. You don’t get to have opinions and preferences that differ from His.

It’s clear that you’re not submitting to the authority of Scripture when you’re presented with, for example, 1 Timothy 2:12, and video evidence of your favorite teacher violating that Scripture, and your retort is, “But that’s the only place the Bible says that!”. (It’s not, but even if it were, how many times do you demand that God must say something before you’ll believe or obey it? Two? Seventeen? Ninety-three?) Or you attempt brush that Scripture aside as, “That was only an instruction for that particular time and culture,” when verses 13-14 make clear that it’s not.

Once again, you are in the driver’s seat, not God and His Word. You have no moral or factual credibility of your own. Why should someone believe you over God?

2.
Failing to Argue from Scripture

When someone says to you, “Scripture says X. Your favorite teacher says Y on page 252 of her book,” you can’t defend her by saying, “You’re just a mean old doody head!” or “But she’s so nice and she’s had such a positive influence on my life!”. It would be just as effective to say, “But she’s from Montana!” or “She flosses her teeth so nicely!” So what?

Maybe I am a mean old doody head. Maybe I’m not. Maybe she has had some positive influence on your life, or maybe you only think she has because your definition of “positive influence” is your definition, not God’s. That’s not the issue. The only issue is whether or not she is walking blamelessly and teaching what accords with sound doctrine as measured by rightly handled, in context Scripture. And to argue that she is, you have to get into your Bible, study it, and present your case from God’s written Word. In other words, the fact that you like her or she’s nice doesn’t prove that what she’s teaching is biblical. And arguing those things as though they do shows that you either don’t know or don’t care what the issue is; what you care most about is your personal feelings and preferences – not a strong argument for believing anything you have to say about her being a good teacher.

I appreciate it when people at least try to defend a teacher or doctrine by using Scripture. I really do. If nothing else, it shows you know that teachers and doctrine are supposed to be in alignment with Scripture and that Scripture is our authority as Christians. And those are two very important biblical concepts.

But when you attempt to defend a teacher with Scripture and it’s obvious you don’t understand the passage, have taken it out of context, or are twisting it, you’re making my argument for me that you should not be sitting under that teacher. Because if she were as great of a Bible teacher as you say, and you’ve learned so much from her, you wouldn’t be mangling God’s Word. She would have taught you how to handle it properly.

It’s hard for me to believe your argument when you’re making mine for me.

I’m not sure which one is worse when it comes to defending false teachers. Increasingly, I will mention that, for example, Priscilla Shirer is a false teacher, and one of her followers will pipe up and demand that I provide evidence to back up this assertion. I provide this article, which contains copious amounts of both Scripture and video, audio, and text evidence of how Priscilla violates these Scriptures. The person then comes back and brazenly says I have provided no evidence and no Scripture. Not that she disagrees with the Scripture and the evidence I’ve presented, but that it isn’t there.

I guess I shouldn’t be so dumbfounded that this keeps happening, but I am. Because when you make a statement like that, there are only two possibilities: a) you’re lying – saying you’ve read the article when you haven’t, or b) you are denying the existence of something that’s in black and white in front of your own eyes. I’m not really sure how to handle that in Christian apologetics. If you’re clearly lying, you’re not believable, and there’s no common ground for reasoning and discussion. And if you’re denying reality – well, when I was getting my degree in psychology, we were taught that you needed to be medicated. All I can say is that neither speaks in favor of your credibility.

5.
Displaying the Fruit of the Flesh

We all know what the fruit of the Spirit is: love, joy, peace, patience, kindness, goodness, faithfulness, gentleness, self-control. But frequently, people (who profess to be Christians) do not present their defense of a false teacher with an accompanying display of that fruit. Quite the opposite, in fact. Their argument is presented in hatred, anger, bitterness, fear, unkindness, impatience, harshness, and with wanton abandon. We’re not talking a polite disagreement, here. We’re talking name-calling, profanity, threats, and verbal evisceration. From people who claim to be Christians. In defense of someone they don’t even know personally.

When you act that way, I’m hard put to even believe you’re a Christian, much less that you have a valid, biblical argument, or that this teacher is doing a bang up job of teaching you the Bible so you can be conformed to the image of Christ.

6.
The Bible Doesn’t Back You Up

This is the most significant reason people who claim to be Christians yet defend false teachers lack credibility. The Bible doesn’t find them credible either.

Take a moment and read John 9:1-10:31 (I know it’s long, but you need the context.) This passage is about knowing and following Christ (not, as so many false teachers like to claim, that if you’re a Christian you’ll be able to hear God speaking to you audibly). “Thieves”, “robbers” (10:1), “strangers” (10:5), and “wolves” (10:12) are all false teachers who do not enter the sheepfold by the door (Jesus – 10:1,7) but sneak in some other way. Jesus is very clear in this passage that if you’re truly His sheep, you will follow only Him, not a false teacher:

First Corinthians 2:14 says that if you’re not saved, you won’t be able to understand the true, biblical things of God. The will seem like foolishness to you and you will reject them:

The natural person does not accept the things of the Spirit of God, for they are folly to him, and he is not able to understand them because they are spiritually discerned.

In other words, Jesus says that following and defending false teachers doesn’t match your claim to be one of His sheep (a Christian). And rejecting incontrovertible biblical truth because you consider it to be foolishness is a symptom of someone who isn’t saved. Either you’re a genuinely born again Christian who embraces biblical teaching and rejects false teachers or you embrace false teachers and reject biblical teaching because you’ve never truly been born again. The Bible says you can’t do both at the same time.

God has made things pretty simple for us. He has given us His written Word as the standard for our beliefs and practices. All we have to do is hold it up, like a yardstick, next to every doctrine and teacher who comes our way and throw out anyone and anything that doesn’t measure up. It’s when professing Christians try to use another standard or fudge the measurements that problems arise. Credibility lies with those who believe and hold high the standard of God’s written Word – not because of anything within themselves, but because they stand behind and glorify the Author of truth.

This touched my heart.❤️
😂😂From @thewanderingpilgrims
Today on the blog: “Lord, equip me for what You’ve called me to do, and give me joy in serving my family.”
Meme level: Expert