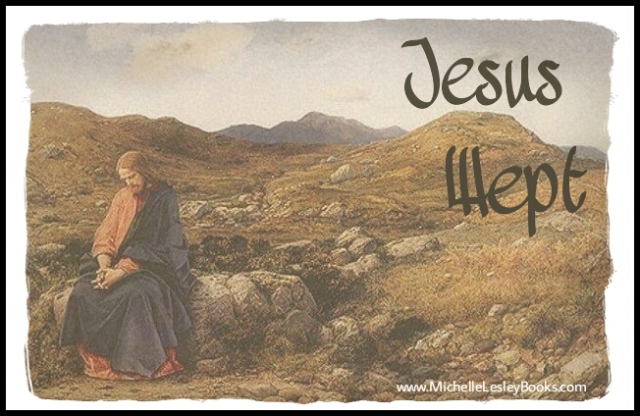 It was hardly a day for tears.

It was a day that should have been the high point of His ministry.

As soon as He was approaching, near the descent of the Mount of Olives, the whole crowd of the disciples began to praise God joyfully with a loud voice for all the miracles which they had seen,  shouting:
“BLESSED IS THE KING WHO COMES IN THE NAME OF THE LORD; Peace in heaven and glory in the highest!”

After three years of hard work and harder prayer, miracles, and countless hours of teaching, the people were finally getting it.  They recognized that Jesus was the Messiah.  His people were giving Him the praise He was due.

When He approached Jerusalem, He saw the city and wept over it,

What’s this?  This isn’t part of the Palm Sunday pageant.  In every Bible, commentary, and Sunday School lesson, this scene is called “The Triumphal Entry”.  Why is Jesus over there crying?  What’s that He’s saying?

“If you had known in this day, even you, the things which make for peace! But now they have been hidden from your eyes.
“For the days will come upon you when your enemies will throw up a barricade against you, and surround you and hem you in on every side,
and they will level you to the ground and your children within you, and they will not leave in you one stone upon another, because you did not recognize the time of your visitation.”

Once again, Jesus sees through the outer display of behavior and lays the heart of the people bare.

They’re praising Him because He multiplied bread and fish.

Because He healed diseases.

Because they think their Messiah has come to set them free from Roman oppression.

They don’t get it after all.  And that’s why He’s weeping.

And as I watch my Savior’s heart break over His people so many years ago, I wonder– is He still weeping today?

Every Sunday, we, Jesus’ people, offer Him loud Hosannas.  We lift our palms in celebration of His goodness and blessings.  We sing out His praise.  We kneel before Him.

But is He weeping?

Does He see through our outward behavior to a heart that just wants worldly trinkets from Him?  Does He see a church that draws near to Him with its lips but whose heart is far from Him (Isaiah 29:13)?  A stiff-necked people who deigns to physically bow the knee but not crucify the will?

Are we the new Jerusalem?