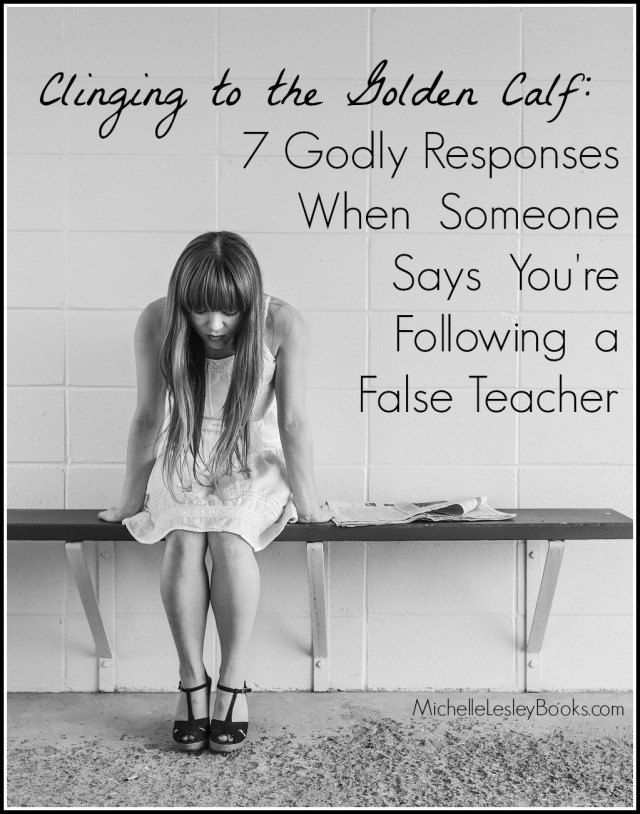 Ever heard of Jeroboam? If you’ve read your Old Testament, the name probably rings a bell, but, let’s face it, it’s hard to keep all those Jeroboams, Rehoboams, Ahinoams, and Abinoams straight, right? Well, let’s read a little bit about Jeroboam:

And Jeroboam said in his heart, “Now the kingdom will turn back to the house of David. 27 If this people go up to offer sacrifices in the temple of the Lord at Jerusalem, then the heart of this people will turn again to their lord, to Rehoboam king of Judah, and they will kill me and return to Rehoboam king of Judah.” 28 So the king took counsel and made two calves of gold. And he said to the people, “You have gone up to Jerusalem long enough. Behold your gods, O Israel, who brought you up out of the land of Egypt.” 29 And he set one in Bethel, and the other he put in Dan. 30 Then this thing became a sin, for the people went as far as Dan to be before one. 31 He also made temples on high places and appointed priests from among all the people, who were not of the Levites. 32 And Jeroboam appointed a feast on the fifteenth day of the eighth month like the feast that was in Judah, and he offered sacrifices on the altar. 1 Kings 12:26-32a

The Kingdom of Israel had just split into the southern kingdom of Judah and the Northern kingdom of Israel. Jerusalem, where the temple is located, is in Judah. Jeroboam (king of Israel) figures that if his people continue traveling to Jerusalem for feasts and sacrifices, they will eventually turn their loyalty back to the the kingly lineage of David (aka: Judah, 26-27) and he’ll lose both his kingdom and his head. So, in order to keep the people inside the borders of Israel and control them, he makes a couple of golden calves (which somebody should have remembered turned out badly the last time that was tried {Exodus 32}) for them to worship at either of two convenient locations, Bethel, in the southern part of Israel, and Dan in the northern part. Jeroboam, leading the way, had the Israelites simply transfer their feasts and sacrifices that they would have offered to God to these golden calves. It’s a fascinating story that you can read more about here if you’re interested.

So why am I going on and on about Jeroboam?

Because Jeroboam’s story is so similar to something that is happening in the visible church today. He was a well known personality who led God’s people to worship an idol which he told them was God. And God’s people went along with it, transferring their worship from the one true God to the golden calf called “God.”

There are a ton of Jeroboams out there today. Some of you reading this might be following one of them and worshiping the idol their false theology tells you is the God of the Bible. And in the same way that a man of God came along and rebuked Jeroboam for his blasphemy, a man or woman of God might come along and call out the Christian celebrity you’re following, or take you aside -out of love and concern- and let you know that person is a false teacher.

I hope you won’t respond like Jeroboam did. He was so angry, he tried to kill the prophet. But sadly, I have seen this type of response (at least verbally) many times, especially from women, when faced with the fact that their favorite Bible teacher or author is preaching a false gospel.

So, what’s a godly way to respond when someone tells you you’re following a false teacher?

1. Consider the source and Listen.

If you know the person who’s telling you this, think about her godliness and character. Is she generally a godly person? Does she know her Bible well? Does she show love and concern for others? Is she trustworthy? A godly person of good character has no reason to toss out wild and unfounded accusations, especially if you’re her friend and it might offend you. In fact, she’s probably scared to tell you.

But even if it’s a stranger on a blog saying Celebrity Bible Woman is a false teacher, hear her out and make sure you understand what the issues are. Remember, what she’s saying might be true, but you’ll never know if you immediately write her off.

There are some discerning people out there who will bring you flowers and candy and hold your hand as they gently tell you the person you’re following is a false teacher, and then there are discerning people whose tone or manner might rub you the wrong way as they’re delivering the news. Don’t let the way something is said turn you off to the content of what is being said. Don’t sacrifice truth on the altar of tone.

3. Keep your emotions in check.

It’s tempting to let our feelings take charge when we’re receiving bad news, but you aren’t going to be able to evaluate the content of what the person is saying if you’re consumed by rage or hurt. It might help to remind yourself of your relationship to the teacher/author in question. Do you even know her personally? It’s not like someone is leveling accusations against your child, spouse, or best friend. Put your emotions aside and let reason and clear thinking rule the day.

You don’t have to -nor should you- believe everything you hear just because it quotes a Bible verse or wraps itself in the label “Christian”. That applies to both the person who tells you you’re following a false teacher and the alleged false teacher herself. Listen carefully to what the person has to say, make sure you understand it, then get out your Bible and get to work. Are the issues the person has raised biblical? What does God’s word have to say about these issues? Is the person you’re following violating Scripture? If so, choose to stop following the false teacher because the Bible -not a person- tells you to do so. People are fallible. God’s word is not.

It’s been my experience that women who are loyal devotees of false teachers can be some of the most vicious people in the world if you dare to question their idol. I have had women verbally rip me to shreds, threaten me, call me names, accuse me of “judging,” and tell me I’m what’s wrong with Christianity for politely pointing out from Scripture that someone is teaching false doctrine. Ladies, we give Christian women as a whole a bad name when we act like that. More importantly, that kind of behavior is a reproach to Christ, and never appropriate for someone who calls herself a Christian.

6. Defend from Scripture, not opinion, emotion, or personal preferences.

7. Love Christ more than you love your favorite teacher.

If someone shows you from Scripture that your favorite teacher, author, or pastor is teaching false doctrine and you ignore that warning because you are so enamored with that teacher, then what you’re saying is that you love that teacher more than you love Christ and His word. Jesus said:

It can be difficult to hear that you’re following a false teacher. You like her. She makes you feel good. You think you’re doing great in your walk with the Lord. It’s hard to give all that up. But we must be careful that we never put our feelings for a person above Christ and His word. If someone tells you you’re following a false teacher, don’t brush her off or attack her. She’s most likely coming to you out of love and concern for you and for the body of Christ. Check out what she’s saying against the Bible. And if she turns out to be right, stop following that false teacher and thank her. Because a person who rescues you from an enemy of Christ is truly your friend.

Check out my friend Pamela’s great article on this same topic called The Christian Woman’s Guide to Conversing with Bereans.

1 thought on “Throwback Thursday ~ Clinging to the Golden Calf: 7 Godly Responses When Someone Says You’re Following a False Teacher”

Look where I got to go today! (On the way to my Montana conference. My plane landed in Rapid City, SD.)❤️
Today on the blog: Are you thankful for your pastor and a church that rightly handles God’s word? Are you telling anybody you’re thankful? Are you telling your pastor? (Link in bio)